Miguel de Porras: “Agriculture must represent the vanguard in the transformation towards a more circular production”

The director of the Research Institute of Organic Agriculture, FiBL affirms that today the reduction of the environmental impact of agriculture is imposed no longer as an ‘ideological’ option, but as an economic necessity. And in this line, he affirms, the increase of ecological agriculture or agroecology in Chile, due to its productive capacity, can represent an important competitive advantage. 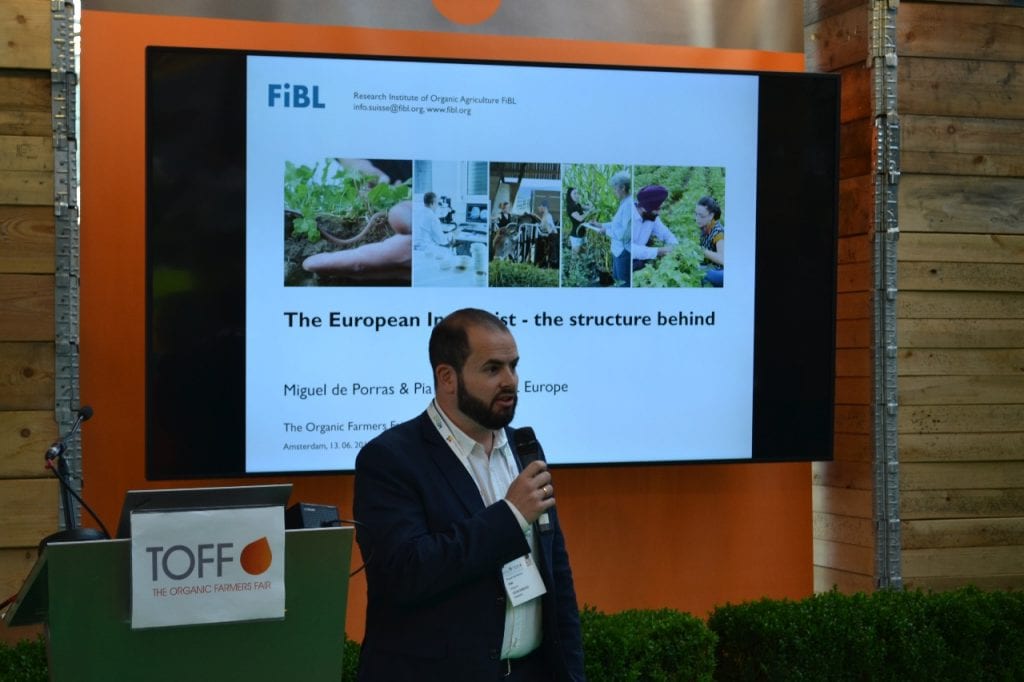 Miguel de Porras, director of the Research Institute of Organic Agriculture of Europe, located in Brussels, is in charge of coordinating more than 300 researchers from all over the continent and disseminating scientific information on this booming production system. And it was the latter that was present in the Chile-Europe Circular Economy Meeting held last December by the Eurochile Business Foundation, with the aim of promoting the development of this trend in the country.

Today, he says, there is agreement among the scientific community about the unsustainability of our food systems and that the absolute need for their transformation is broad, if not globally. And this includes not only the carbon emissions registered by its production, but also aspects such as the loss of biodiversity, the loss of fertile soil and the degradation of fresh water sources, among others.

“If we consider all the dimensions of the environmental impact that our agri-food systems have, the urgency is extreme,” says De Porras. But in this, he adds, “we must consider that sustainability is not only an environmental aspect but also a social and economic one, and in this sense we also attend increasingly volatile markets and prices that erode the remuneration of farmers on a global scale and they cause the emptying and loss of social and cultural structures in many rural areas around the world ”.

Transformation is needed today, and the longer we postpone it, the higher the costs will be for our farmers and our societies at large. This transformation should undoubtedly take place in the agriculture sector, due to its direct link with natural resources, so that “agriculture must represent the vanguard in the transformation towards more circular production”, says the Spanish expert. “Circularity and the reduction of the environmental impact of agriculture are imposed no longer as an‘ideological ’option but as an economic necessity. Agriculture is called aimed to develop effective and sustainable economic incentives for the transformation and adoption of more circular models with less environmental impact”, he affirms. And organic farming will play a key role in this.

What is organic or ecological agriculture?

It is one that respects the organic production regulations. These are regulations that strictly regulate the type of practices and inputs accepted in production systems that respect the environment. In Europe it is the, still in force, regulation 834/2007 and the future 848/2018 that will definitely come into force in 2022. In Chile the policy that regulates this type of production is 20.086, which has been recognized as equivalent to the regulations of the EU in the 2017 agreement, the first “new generation” agreement for trade in organic products. Another well-known regulation is the NOP developed in the USA. Compliance with these standards is normally certified by external control bodies that inspect the production standards in each farm or establishment. However, this complex system of regulation and control exists thanks to the visionary work of the organic farming movements, united around the umbrella IFOAM (International Federation of Organic Agriculture Movement). These movements agreed on the four fundamental principles of the organic farming movements: health, ecology, equity and precaution. The interaction between movements and regulations is complex, but it is essential to know these two dimensions of the definition of organic farming, so to speak, one referring to the “body” and the other referring to the “soul” of this type of agriculture.

What is the potential for the sector to adopt circular production models?

From my point of view, the question should not be what is the potential of this transformation, but rather, what is the potential of “business as usual” How far can we go? In Europe, the adoption of the circular economy is considered a horizontal priority that concerns all productive sectors. The development of an economy less dependent on inputs and raw materials from other territories, as well as an economy that revalues ​​waste and waste to re-integrate it into the production cycle, is a necessity, not an option. Even so, the potential is far from reaching its maximum; we still find absolutely irrational scenarios, both ecologically and economically. The circular economy is a broad concept to include many different practices, some more rational, efficient and effective than others, but in general making our economies more circular presents clear environmental and economic improvements for those who implement them. In agriculture, the closure of biophysical cycles, the protection and recovery of soils, the diversification of productions, the recovery of waste, etc. they are strategies that not only improve the environmental impact but also improve the competitiveness of our agricultural sector. It is not a question of abandoning agriculture to a semi-subsistence condition, but of investing where technologies and new developments can produce change, abandoning the aforementioned “business as usual” logic.

Could you mention some cases of successful application of this type of agriculture in Europe?

Undoubtedly, there are many examples of circular economy in the European agricultural sector, from the use of waste from the fishing industry to the production of  high phosphorous biofertilizers; in this field FiBL participates in the SEA2LAND project that will begin next year exploring this type of circular innovations. Another example that I would like to point out is the European list of inputs for organic farming. FiBL develops this list since 2017 built on different national lists. We analyze the composition of the inputs to guarantee farmers their acceptance in organic farming. Currently this list that covers the supplies marketed in 6 European countries (Switzerland, Germany, Austria, Holland, Italy and Croatia) is registering a real boom. We currently have almost 7,800 different products registered from almost 850 companies. Among them two Chileans. Here we talk about many other success stories in inputs that implement the ecological regulation and the logic of the circular economy.

Regarding circular economy models, does the size of agricultural production influence? Is it easier to apply it in small businesses?

I do not think that size is a requirement for the implementation of the circular economy. There are all kinds of possibilities to promote the circularity of our production models, from waste composting strategies at the domestic level, to complex industrial processes to revalue waste in large processing plants. The answer to this question depends on the type of innovation or technology we are considering, but from our experience in Europe it is clear that these types of innovations exist at all scales.

How does the implementation of these measures impact the final price of the product?

Most innovations in the circular economy in the agriculture sector produce two types of direct economic impacts: the reduction of the cost of production, or the creation of new products or new sources of income. Both impacts can cause changes in the final price of the product, but it will depend on the structure of the market and the competitive situation of the producer. However, if we proceed to consider the ability to add value to the product by reducing the environmental impact, the impacts can be much greater. This is the case of the different sustainable labeling strategies, where there are many diverse experiences, but where organic certification stands out as one of the most effective in adding value to the product by reducing its environmental impact. Eco-labeling is widely recognized by consumers, in Europe it is one of the best-known labels and whose presence is a clear attraction. Implementing the logic of the circular economy in agriculture has its economic logic, but its combination with environmental certification systems, such as that of organic farming, opens the way to large impacts on the final price.

What can we do as consumers to promote the implementation of sustainable agriculture?

Without a doubt, the first answer is to try to consume as local as possible. It is not an illusory claim to eat only something that you can produce on your farm and, try to reduce the number of kilometers from farm to fork is key. In this sense, in Chile, a global power in agricultural, Chilean consumers should make efforts to buy national production. In this context, consumers should try to find out about the origin of food and the conditions in which it is produced, trying to reward the most sustainable experiences at a social and environmental level. In order to put this into practice, it requires good labeling and marketing strategies. Another important aspect is to diversify diets; the more different foods we consume, the more incentive there will be to diversify productions. It is a simple principle that also has positive effects on our health, Chile is a country characterised by its agriculture.

What potential do you see in the development of the circular model?

The productive capacity of Chilean agriculture is astonishing, with great climatic diversity and different types of production. The potential of the circular economy in agriculture is vast, being able to represent the saving of millions in the country’s production costs with efficient planning of the use of waste. But, if environmental ambition does not stop there, I think there will be much more to gain, the consumer is more and more interested in sustainability and it is a process that has no going backwards. We can see it in the growth figures of the organic market that does not stop growing. The increase in ecological agriculture or agroecology in Chile, due to its productive capacity, can represent an important competitive advantage. But this productive transformation cannot be oriented to a traditional export model, it must not be satisfied with that, it must move towards increasing local consumption and regional supply. In this way, by developing both poles of the food chain, Chilean agriculture will be able to maintain its leadership and its resistance to the increasing changes and shocks of the agricultural markets.

Any cookies that may not be particularly necessary for the website to function and is used specifically to collect user personal data via analytics, ads, other embedded contents are termed as non-necessary cookies. It is mandatory to procure user consent prior to running these cookies on your website.