Innovation 2050: International and national experts spoke about the latest trends in circular economy

Through workshops and panels via streaming, the seminar organized by the UC Innovarion Center, Eurochile and TriCiclos addressed the advancement of the circular economy as its main theme. Linnet Solway, director of the Technology Transfer and Circular Economy area at the Foundation, spoke about the work being done in the construction of the Roadmap to guide Chile’s path in this area. 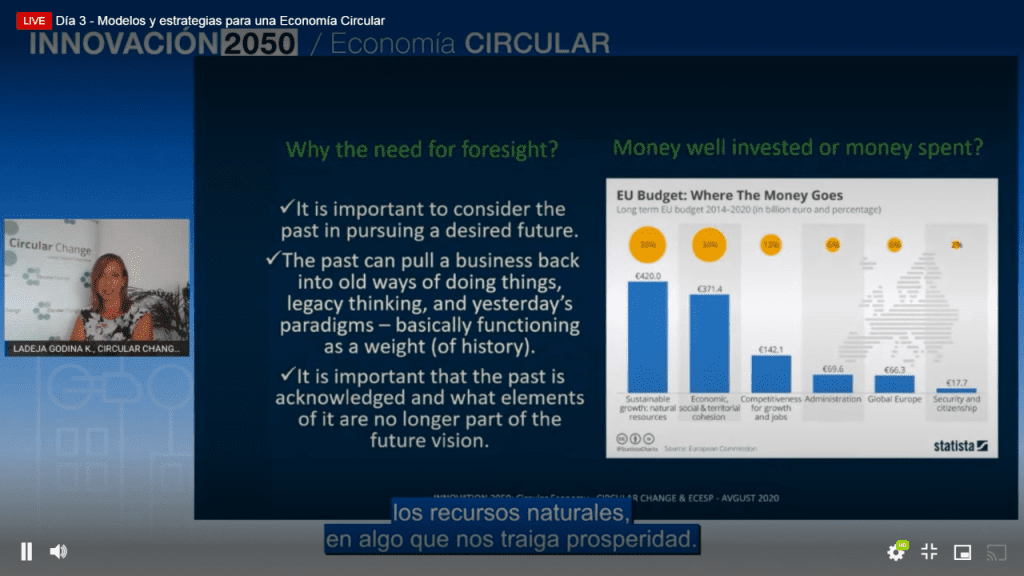 In the face of sustainability challenges, particularly climate change, the circular economy has become a key issue in those societies that seek to advance towards models of sustainable growth and well-being. In this context, the UC Anacleto Angelini Innovation Center, the Eurochile Business Foundation and Triciclos held the Innovation 2050 seminar specifically focused on this topic.

Over four days, six main exhibitors were highlighted, two practical workshops were held, three conversation panels and more than a thousand attendees gathered for the event, who were able to hear the interesting vision of international experts such as those of the Ellen MacArthur Foundation, Ken Webster , Michiel de Smet and Jocelyn Bleriot. They were also joined by Ladeja Godina, from Circular Change and international advisor to Eurochile in the construction work of the Roadmap for the Circular Economy in Chile.

“As the Eurochile Business Foundation, we are committed to pushing the circular economy agenda in Chile, connecting SMEs with the opportunities presented by this new paradigm of sustainable development. We want to make our 27 years of experience available to the country as the bridge with Europe and connecting key players, to create a roadmap that consolidates Chile at the forefront in this matter ”, commented José Aravena, Executive Director of Eurochile.

For his part, Conrad von Igel, executive director of the UC Innovation Center, highlighted that “in our desire to be a catalyst of ideas and trends for Chile and the region, we seek to address issues that are relevant to our environment, such as the Circular Economy, which is valued as a discipline in order to generate innovative solutions based on people’s needs”.

To provide a context on circular economy, the head of Innovation at the Ellen MacArthur Foundation, Ken Webster, made the first presentation of the day, highlighting that “it is important to replace the extractive economy with a circular economy, based on a social pact, to build a future that seeks the good of all”.

Francisco Pizarro, deputy director of R&D at the UC Innovation Center, commented that “the circular economy proposes a radical systemic change that points to eco-design, industrial symbiosis, the economy of functionality, reuse, repair, remanufacturing and recovery. This approach promotes innovation and long-term resilience and enables the development of new business models”.

The second day focused on the long-term circular economy, so Gonzalo Muñoz, High Level Climate Action Champion COP25 and founder of TriCiclos, explained that “the linear economy has reached its limits, where exhaustion has already begun to be seen in a series of natural resources and fossil fuels, as well as the space available to dispose of the garbage that we generate”.

“With increasingly stricter regulation and new consumer practices, the circular economy is becoming a smart way to develop business models that are more resilient to future changes,” said Michiel de Smet, leader of the finance program at the Ellen MacArthur Foundation.

The last day of exhibitions was mainly dedicated to reviewing models and strategies for a circular economy starting with Ladeja Godina, founder and CEO of Circular Change, who referred to the circular economy as the oldest concept on earth, in which nature it is an organized bioeconomy on the principles of the circular economy where nothing is lost and everything has its purpose.

For his part, Jocelyn Bleriot, head of Institutions, Governments & Cities at the Ellen MacArthur Foundation, stated that “for the moment, we cannot install the circular economy overnight. There are many rules that are simply contrary to it, they were designed to serve the industrial or linear model. Now that we want to transition, it’s important to sit down and see what needs to be unpacked and dismissed. ”

In this context, the head of the Office of Circular Economy of the Ministry of Environment, Guillermo González, and the director of the ​​Technology Transfer and Circular Economy area of Eurochile, Linnet Solway, presented the progress in the construction of the Roadmap for the Economy Circular in Chile, which seeks to set a series of specific short, medium and long-term goals to promote this trend in the country with an horizon to 2040.

There, Linnet Solway explained that Eurochile’s decision to address this issue is part of the Foundation’s role in promoting the transfer of technology and knowledge from Europe, and the establishment of commercial links with the countries of that continent.

“We are always looking at the most promising themes and with the greatest future for Chilean-European cooperation. Today, with the Green Deal presented by the European Union and the action plans they have on circular economy, they are undoubtedly installed as leaders in this matter. Therefore, as a foundation that seeks to promote the sustainable development of the country, we really see in the circular economy a great opportunity for everyone: for the country, for SMEs and institutions. It is an opportunity on many levels, “she said.

And regarding the progress existing to the date in the construction of the Circular Economy Roadmap for Chile, she presented the strategic diagnosis on the circular economy in Chile, which was the starting point for the work of the Roadmap, and shared part of what has been done so far.

“We have just finished the work on the theme tables, a very intense activity that has been carried out since the end of June until now, where we have worked on 11 different themes with 130 actors to raise initiatives and ideas to generate the action plan. This participatory process is what is giving, and is going to give, a lot of value to this roadmap”, explained Linnet Solway.