Created in 2019 as a platform to link business that seeks to promote cooperation and advance the transition to a circular economy in Chile, the last webinar of the working group brought together 45 participants to learn about the progress and scope of their work, and listen to Spanish experts on the main topics of this trend in Europe, as well as knowing practical cases implemented by companies. 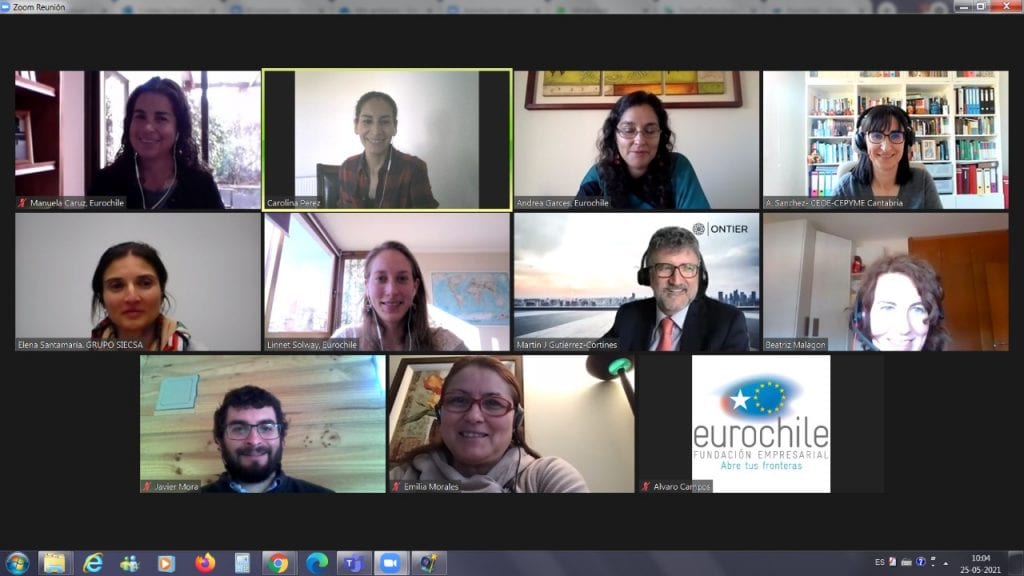 Within the framework of the activities of its Circular Economy Working Group, created as an instance to promote the adoption of this trend in national SMEs, Eurochile Business Foundation held a webinar with Chilean companies and Spanish experts to analyze the progress of this model globally and learn about successful adoption experiences in companies, and open the possibility of new partners to join the group.

Created in 2019 as a platform to link business that seeks to promote cooperation and advance the transition to a circular economy in Chile, today it has eight partner companies representing a wide variety of areas, including smart agriculture, consulting, management waste, EPR and recycling law, start-ups, engineering and design. Today, its work is focused on three major objectives, says Linnet Solway, director of the Area of ​​Technology Transfer and Circular Economy at Eurochile.

“The first,” she explains, “is to support circularity strategies in Chilean companies through access to knowledge, new technologies and the search for financing.

The second objective is to create and make visible a network of companies for the circular economy that invites them to be part of a circular business value system and create a collaboration network -both with the different actors in its value chain or with other industries- to achieve a truly dynamic ecosystem to implement the circular economy. And finally, to connect Chilean and European companies committed to the circular economy, promoting cooperation and exchange of experiences between both parties”.

In this, Eurochile plays a key role as the only contact point in the country of the Enterprise Europe Network (EEN)- which operates with the approval of the European Commission- and which is the largest support network for all types of companies with international projection and -above all- innovative potential. “It is a network that works mainly through the uploading of profiles to this virtual platform, where counterparts of technological and/or commercial supply or demand are sought”, explains Manuela Caruz, Director of Networks at Eurochile. Since 2020, its main lines of work have been sustainability, digitization and the resilience of companies within the framework of the new objectives set by the European Union for recovery.

“We are three thousand people spread all over the world, with a presence in more than 60 countries. We combine experience in international business with a very deep knowledge of the local company to support them in their internationalization process, as well as promotion of business and technological cooperation in research and development programs. Our main objective is to support SMEs, but universities, business associations, chambers of commerce and technology centers also participate. A very important aspect is to promote business and technological cooperation in research and development programs”, adds Adela Sánchez, director of the European Projects Office at CEOE CEPYME of Cantabria, Spain and project manager of the EEN network.

All this is an additional value to the companies that join the Eurochile Circular Economy Working Group, which among its different activities considers the exchange not only between its partners and national actors, but also with international experts to exchange information on the implementation of the circular economy, as well as access to the different Eurochile business cooperation services”.

“What we seek is to support companies to have well-defined points to move towards a circular economy; that they are connected with the circular ecosystem, that they have knowledge of concepts and strategies related to this trend, and that they finally become companies with a differentiating value offering”, says Linnet Solway.

The webinar carried out by the Eurochile Circular Economy Working Group, which brought together 45 participants, also featured a presentation by the Spanish Martín Silvan, Legal Counsel of the Department of the Environment of ONTIER, Spain, on theory and practice of the circular economy.

For Silvan, many of the circular economy proposals – such as taking advantage of resources, reducing waste, being efficient – are common practices in any business activity, and almost a requirement to have some success. The difference is that today, a series of methodologies and processes have been established as regular procedures which have broadened the range of possible actions, as well as clear objectives that can also be measured and quantified. “We are going to use all of this for one purpose, which is to make our system sustainable,” he says.

This process, he adds, has strengths and weaknesses. Among the first, that the current economic model continues to be based on the fact that resources are unlimited, so a first step is to overcome this concept. To this are added others such as resistance to change, the appearance of “opportunism” that can give rise to businesses that seem to be circular, but are not; and also the fact of “forcing the concept” as it happened with sustainability, a concept that ended up being used for everything. Abusing the concept of circular economy has the danger of emptying it of content.

“Among the strengths,” Silvan adds, “the first is that today we have no other, so we are forced to do so. In this case, the need will lead us to virtue, which is nothing other than sobriety and efficiency. We have to do it, the limits to growth exist and we have to adjust to that reality, and ignoring reality is not usually a good tactic”.

Added to this is an enormous disruptive strength, which has taken a huge step in terms of R+D+i in which situations that a few years ago were impossible to address from the point of view of circularity, today they are. And this in all phases, from design to recovery, from use to reuse. Another strength is the rise of entrepreneurship that puts new products and new services into circulation, as well as an increase in the efficiency of processes: doing the same, or more, using much fewer resources.

The presentation of Martín Silvan was followed by two Spanish companies, which gave a view of the possibilities of the circular economy in the industry. The first of them was presented by Beatriz Malagon, director of the Mataporquera factory of the Cementos Portland group, regarding the incorporation of the circular economy in its cement and clinker manufacturing process. This has been done mainly through the replacement of fossil fuel in its furnaces with a fuel derived from waste (energy recovery), which has increased both the competitiveness and sustainability of the company, also supporting its energy transition plan and climate neutrality.

The second case was presented by Elena Santamaría, head Integrated Management Systems, Quality and Environment department of the SIECSA Group of Cantabria. In one of its subsidiaries, a construction company, they are incorporating the circular economy from two main lines. The first is the recovery of iron and steel aggregates from a steel factory in Cantabria to incorporate them into construction, and the second is the management of construction and demolition waste. To do this, they have a mobile recovery plant that moves around to recover the waste generated on site, and reuse it there.

This has allowed that, of the aggregates used on site in 2020 by the company, 32% correspond to reused material and 44% to recycled material, leaving only 24% corresponding to quarry aggregates, or natural aggregates.

Finally, the virtual meeting concluded with a speed dating, a networking activity that allowed participants to meet in smaller groups to generate contacts with other companies and talk about their experience in this transition towards the circular economy.