The encounter, this time, will be through a virtual platform, and will take place between December 9 and 11 jointly with the Enterprise Europe Network of the European Commission and Corfo, in order to deepen the work that Eurochile has carried out in this matter in recent years. 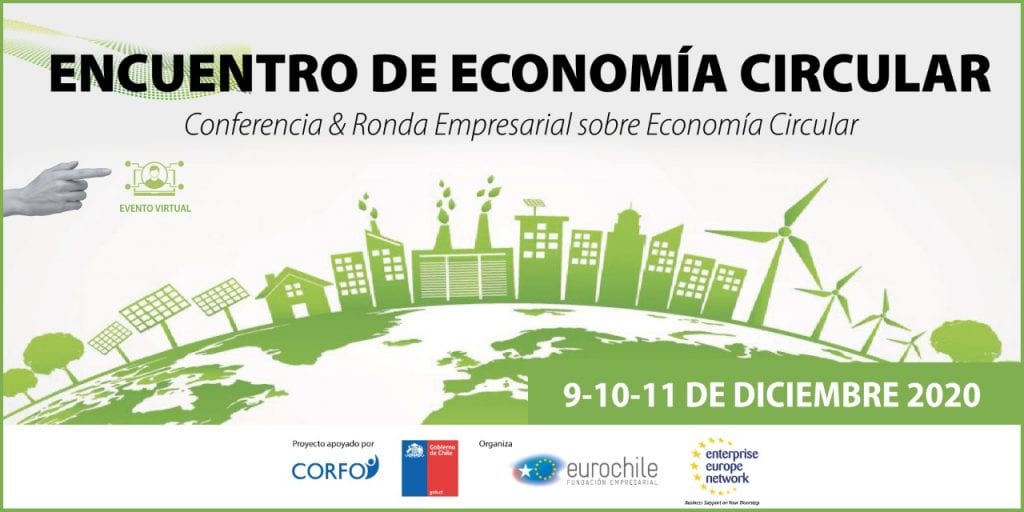 In December 2019, within the framework of the COP25 Climate Change Summit that took place in Madrid -co-chaired by Chile and Spain-, Eurochile Business Foundation organised in conjunction with the European Union a Side Event in the Blue Zone of COP25 on the role of the circular economy and nature-based solutions to tackle climate change. It was a high-level meeting, where one of the main speakers was the Vice President of the European Commission (EC) for the European Green Deal, Frans Timmermans, who a few hours before had officially launched the new Green Deal of that continent.

Today, Eurochile once again organises a high-level event between Chile and Europe to address the implementation of the circular economy in a new scenario, marked by the global economic crisis generated by the Covid-19 pandemic and the installation of the debate on implementation of a new model of global development, where this trend appears – again – as one of its main focus.

The encounter, this time, will be through a virtual platform, and will take place between December 9 and 11 jointly with the Enterprise Europe Network of the European Commission and Corfo, in order to deepen the work that Eurochile has carried out in this matter in recent years.

“We have been working for years on the issue of the circular economy, very closely with the Directorate General for Environment of the European Commission, to promote this trend in the country and help companies jump on the bandwagon of the circular economy, because we believe that it is the future development model of the countries, not only of Chile. And on this issue the leadership of Europe is very clear. We want to transfer this knowledge to our companies and help the country move in this direction”, explains José Aravena, executive director of Eurochile.

To this is added, he adds, that “this year we are working with the Ministry of the Environment in the construction of a Roadmap for the Circular Economy, which will set the course of the country in this matter between now and 2040. We have been in charge of this work from the technical secretariat, and it is certainly one of the topics that we are going to address in this webinar and in the brokerage event”.

Present at the meeting will be the Chilean Minister of the Environment, Carolina Schmidt; Sebastián Sichel, President of Banco Estado, Jocelyn Blèriot, Executive Leader of International Institutions and Governments, Ellen MacArthur Foundation as well as other experts and representatives of organisations and companies related to the circular economy, such as European Circular Economy, SEGITTUR (Spain), FiBL (Brussels), Enel, Acera and CChC, among others.

The objective is to position the circular economy as a new productive form for sustainable growth, both for the productive sectors of Chile and Europe; exchange experiences of good practices and transfer knowledge in this matter, and analyse business and financing models for the circular economy in small and medium-sized companies, among others.

For this, presentations and conversation panels will be held with Chilean and European experts, success stories will be presented, there will be instances of thematic workshops, and a brokerage event will be held with the support of the Enterprise Europe Network (EEN).

The event, explains José Aravena, will be organised into four main panels, each of which will address a specific topic. The first will discuss to the major issues in Europe -the Green Deal-, in Chile -the road map- and other issues, to disseminate and deepen the macro policy that guide the implementation of this trend.

The second panel will address the sectoral challenges, where it will seek to “land” the circular economy issues to economic sectors such as agriculture, tourism, construction, and renewable energies, also analysing the benefits that its implementation implies for companies.

A third panel will have a practical focus on financial and technological instruments and tools that can help the concrete implementation of the circular economy, and the final panel will point to projections for the future, expected results and the role that the different actors will play in this new scenery.

TO REGISTER FOR THE EVENT: https://economiacircular.eurochile.cl/

MORE INFORMATION ABOUT THE EVENT: economiacircular@eurochile.cl