Through its director of the Technology Transfer and Circular Economy Area, the Foundation participated in two seminars – national and international – to analyse the construction of the Roadmap for the Circular Economy of Chile, and the new European measures and programmes for the implementation of this trend. 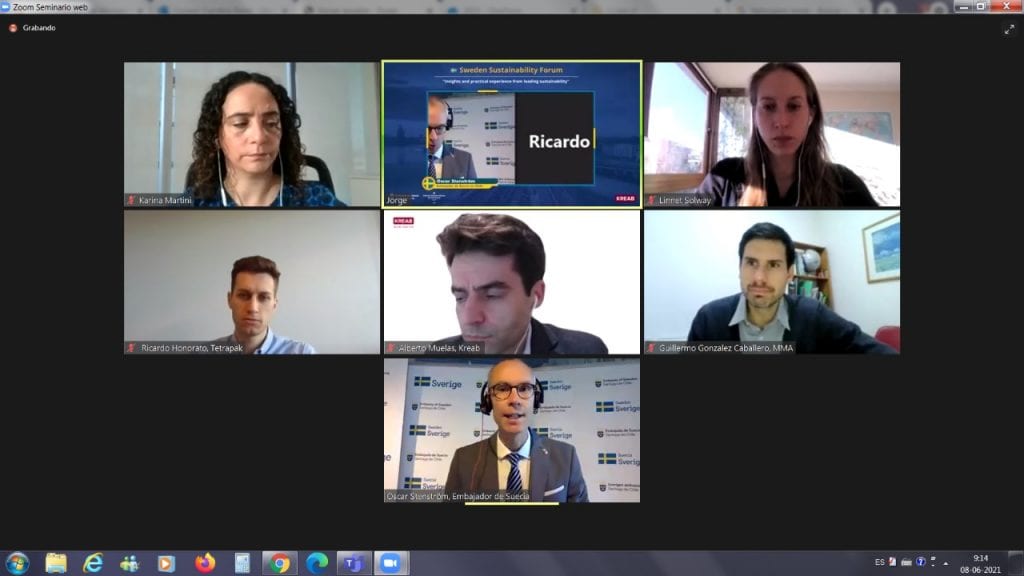 In recent weeks, Eurochile has had an important presence in forums related to the advancement of the circular economy and its future development of the country, through presentations made by its director of the Technology Transfer and Circular Economy Area, Linnet Solway. In them, not only the work carried out by the Foundation to advance this trend in the country was addressed, but also its role as a “bridge” to promote technology transfer, knowledge and commercial linkages in this matter between Chile and Europe, a continent that today leads its implementation at a global level.

The first of these was the International Environment and Sustainability Forum and Fair (FIMAS), organized by the Association of Companies and Professionals for the Environment (AEPA Chile), held on May 27 and focused on progress for a development model based on the circular economy.

There, Linnet Solway spoke about the process of preparing the new Roadmap for the Circular Economy, a process led by the Ministry of the Environment and where Eurochile guided the construction work and drafting of the proposal and final document coordinating the dialogue between multiple actors.

Solway explained to the attendees how the governance of the committee was formed and the participation of different stakeholders, a process that had more than 130 participants, more than 100 meetings and workshops, the support of 10 international advisers and the development of 11 thematic tables to address specific aspects of the Roadmap, which was finally submitted to a public consultation process that received more than 500 comments for the final document, which will be made official in the coming days.

All this process concluded in a vision that proposes -as a central key- that “by the year 2040 the circular economy should drive Chile towards a sustainable, fair and participatory development that puts the welfare of the people in the center. This, through four lines of action -circular territories, circular innovation, circular regulation and circular culture- each of them with specific objectives and goals for 2030 and 2040”, explained Linnet Solway.

Subsequently, in a second international seminar held on June 8 by the Swedish Embassy in Chile, called “Sweden Sustainability Forum: Insights and practical experience from leading sustainability”, Linnet Solway spoke about the advances of the circular economy in Europe, mainly within the framework of the Green Deal launched by the European Commission (EC) at COP25 to address the climatic, economic and social challenges they are facing today.

She stated that within the framework of this strategy the second circular economy action plan of the European Union (EU) was presented, which updates the previous plan focused mainly on waste management and the end of the production chain, to focus in initiatives that affect the entire chain of the life cycle of the products; among them, empowering consumers to have better information, giving greater importance to eco -design and eliminating planned obsolescence.

Regarding the progress for its implementation, Solway explained that the European Commission “is working on a large number of initiatives, the most specific that comes into force now on July 3 is a legislation on single-use plastics that prohibits certain products, quite similar to the new law that was approved in Chile, and a labeling requirement to provide more information to consumers”. To this- she added- other initiatives will be included such as the delivery of more information by companies to consumers, better traceability in the life cycle of products to avoid greenwashing, the revision of the criteria on eco-design and the incorporation of new products to regulation, including building materials, textiles and furniture.

In parallel, she said, the European Commission is working on two initiatives that, although they are not part of this action plan, are instrumental for the EU to meet its climate objectives. The first one is the unification of a label on the environmental footprint of products; there are currently more than 200 environmental labels in the EU and 80 regarding carbon emissions.

The second initiative is the definition of an EU taxonomy for sustainable activities, which in essence is the creation of a list of economic activities that are considered as environmentally sustainable, and that allows to give information security to both companies and investors and citizenship. “This taxonomy seeks to unify the understanding of what a sustainable economic activity is and inform in the same way (…) This will guide investments in the EU, which can be guided thanks to this taxonomy,” she explained.