Miguel de Porras: “There is a scientific consensus that our food system is broken”

Various concepts, within the framework of acroecology and living lab, were presented by Miguel de Porras, director of the Research Institute of Organic Agriculture in Europe (FiBL) at the Circular Economy Conference: A sustainable and circular agriculture from the region of O’Higgins for Chile, organized by Eurochile and the Regional Government of O´Higgins at the end of March. 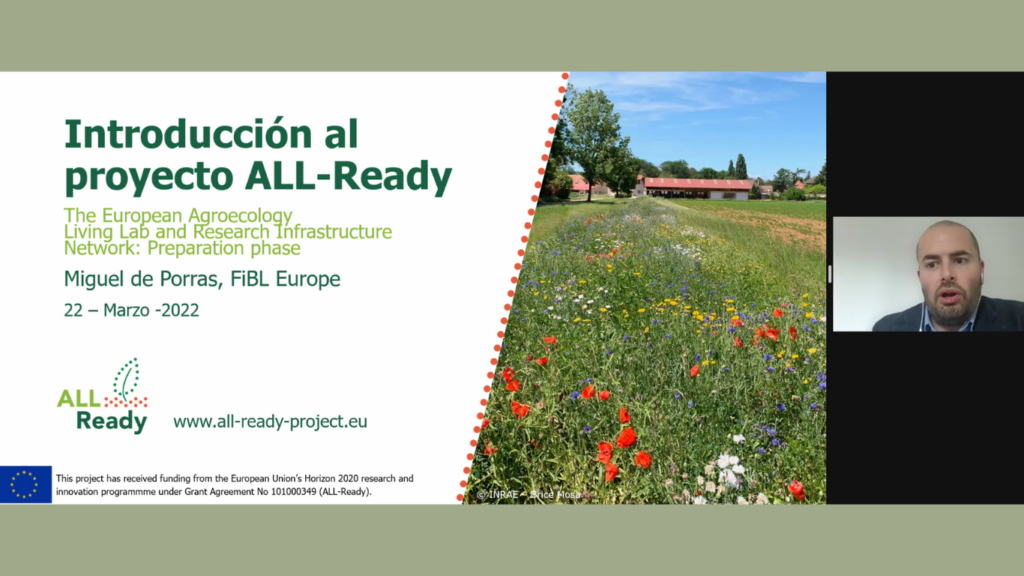 The Spanish expert, Miguel de Porras, with extensive experience in organic farming, leads the most important research network on organic food and agriculture. The work of this director includes, among other things, the coordination of approximately 300 European researchers focused on a wide range of scientific disciplines applied to organic and sustainable agricultural practices. FiBL, founded in 2017 and headquartered in Brussels, Belgium, represents four national research institutes from Switzerland, Germany, Austria, and France, and the Hungarian organic agriculture research institute ÖMKi at the European level.

During his presentation -online from Brussels- at the conference held at the O’Higgins University in Rancagua on March 22, de Porras mentioned the serious consequences of climate change and the need to modify the way in which it is produced and consumed, which has meant that countries around the world, mainly in Europe, have developed different sustainability plans to respond to current conditions.

“There is a scientific consensus that our food system is broken. We cannot continue with the usual practices and we need to build sustainable agricultural production systems that are resistant to the shocks we are facing,” said Miguel de Porras, who presented the work developed around agroecology and the living labs and research infrastructure project.

To do this, he says that the All-Ready project was implemented, which promotes agroecology as an approach that instead of tending towards monoculture and the reduction of species, what it proposes and encourages is the use of diversity for agricultural production. “Plan, create and use diversity, using adaptive management that takes into account the context”.

Specifically, the European Union promotes the living labs program “because it understands that science with impact is needed, which is not done in a laboratory but rather by incorporating actors directly into the process, integrating research activity with the creation of direct impact on the ground. Agroecology requires the involvement of farmers, because it is about doing research directly with them”.

This methodology implies identifying the problems and integrating the knowledge of the farmers. “In a co-creation process with academics, actors or end users are involved and experiments are performed in a real-life context. It is not about simulating in a laboratory but about working in a real environment, that is, on the farm”.

The project is in the planning stage and involves 27 countries. It is estimated that its application will begin in early 2024 and the European Union has proposed to invest around $700 million euros.

However, there is already a pilot plan implemented in Hungary, which has promoted the recovery of traditional tomato, establishing a network of farmers throughout the country where crops are tested and which included a tasting contest that involved consumers. The winning samples have been reproduced and sold on the market as organic varieties of traditional tomatoes.

“It was shown that, involving farmers from the beginning, you can end up with a product with commercial capacity and that can guarantee long-term sustainability,” said Miguel de Porras.