During three days, a complete agenda was carried out, which had the objective of providing a vision of the agriculture and maritime sectors to 19 European companies inserted in Earth Observation (EO). This aimed in having a better knowledge of the Chilean market and identify possible collaborations that lead to future projects or businesses. 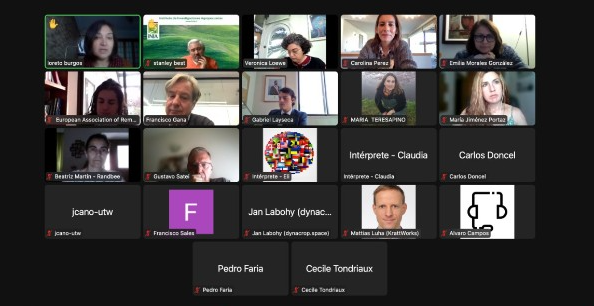 The Trade Mission ConnectEO Chile was held between June 28 and 30, and was attended by different national speakers from SMEs, private and public entities and academia, who highlighted the know-how and how to access Chilean markets- in the agriculture and maritime sectors- as well as identifying local support to establish cooperation alliances with national partners.

The European delegation was made up of companies from Estonia, Spain, the Czech Republic, Luxembourg, France, Italy, Germany and the Netherlands, and for three days they participated – online – in a space generated for cooperation and networking where they learned firsthand how all services and products linked to satellite images work, as well as understanding the Chilean public and private ecosystem.

The first day was attended by the Executive Director of the Eurochile Business Foundation, who expressed his appreciation to the ConnectEO Consortium for being part of the project and for the trust placed in the Foundation for the organization of the event. “Through networking and roundtables, European companies were able to meet with representatives and authorities of the main Chilean entities, from the agricultural and maritime sectors, to learn firsthand about their problems and needs,” said Aravena.

In this context, the Project Officer of the ConnectEO project, Sandra Cabrera, valued the presence of the companies and experts. “Thank you all for your time, both the speakers, interested companies and invited authorities,” said Cabrera.

Juan Arévalo, co-founder of Randbee, one of the European companies present at the event, valued the activity co-organized by Eurochile. “They met expectations and even went beyond, and I also think they were a success in the sense that the speakers were able to focus on the needs of why they were in the programme,” said Arévalo.

The agenda of the first day was aimed at giving a more general view of Chile and the presentations done by InvestChile, Prochile, CIREN, Universidad de Chile and Corfo – were focused on business culture, market trends in the agriculture and maritime, access to data, use of Sentinel in Chile and sources of financing. In this context, Claudio Maggi, Manager of Strategic Affairs of Corfo, explained the objectives of different services, and the existing financing offers for alliances between national and international companies. “We are a team that works to improve the productivity and competitiveness of the productive ecosystem of the territories, through the generation of networks and the support and collaborative work that allows them to improve the value offer of their products and services.”

The second day of the Trade Mission was especially dedicated to the agricultural sector. The activity, structured in 6 different modules, began with the presentation of the International Cooperation Manager of the Instituto de Investigaciones Agropecuarias de Chile (INIA), María Teresa Pino, who spoke about agribusiness and collaborations, highlighting the future challenges in R+ D+i for the agricultural sector, the cooperation that already exists with international entities and the constant interest in identifying possible alliances with international entities.

This was followed by a roundtable – with presentations and discussion- with Chilean institutions in which Gabriel Layseca, Head of the Department of International Affairs of  the Oficina de Estudios y Políticas Agrarias (ODEPA) was present, who explained in a general  how thw institution works; Loreto Burgos, Agricultural Engineer from the Fundación de Innovación Agraria (FIA) indicated that FIA is the only innovation agency of the Ministry of Agriculture that seeks to promote innovation through its strategic guidelines; Stanley Best, Director of the Precision Agriculture Program at INIA spoke about the advances in agriculture 4.0 and its origins; Verónica Loewe, Head of International Relations of the Instituto Forestal de Chile (INFOR) commented on INFOR’s research areas and lines of work in the Management of Native and Exotic Forest Ecosystems, among others, and Francisco Gana, Head of the Department of Studies of the Sociedad Nacional de Agricultura (SNA) explained that the objective of the SNA is to generate a business environment for greater competitiveness for the creation of opportunities in the sector.

Then there were presentations on Agrifood Tech in Chile, Livestock Detection and Software for crop and vineyard management, which were given by professionals from the Instituto de Investigaciones Agropecuarias de Chile (INIA) and West Engineering.

Carlos Doncel, Director of International Sales of Space Sur, a European company beneficiary of the ConnectEO project, praised the topics covered. “For us it has been very interesting to be presented to us by actors from the Chilean reality. Understanding the sector has been interesting and a surprise”.

The last module of the day was directed by the Deputy Director of Space Affairs and Colonel of the Chilean Air Force, Hernán Tello, who spoke about the national project “National Space System”.

During the presentation, the Air Force authority explained what the National Space System project is about. ” The programme establishes a set of initiatives, projects and resources for the development, promotion and dissemination of space activity, in addition to the use of space technologies and applications, to contribute to the implementation, monitoring and compliance with the National Space Policy,” said Tello.

Finally, the last day of the Trade Mission was dedicated to the maritime sector. It began with the intervention of the International Maritime Consultant of Global Sea Consulting, Rodolfo Ponce, who addressed the issue of Maritime Advancement and Collaboration, highlighting that there are different problems that are in the process of improvement through various initiatives and activities, and that there are different efforts to generate maritime environmental awareness.

Then there was a roundtable –  with presentations and discussion – with national institutions where Manuel Bagnara, General Manager of the Asociación de Armadores de Transporte Marítimo, Fluvial, Lacustre y Turístico Sur Austral de Chile (ARMASUR A.G) spoke about the merchant maritime environment of the southern austral zone, the development and challenges; Ricardo Tejada, General Manager of the National Asociación Nacional de Armadores (ANA A.G) explained that the association represents cargo ships and that it is the second largest merchant marine in Latin America after Brazil, and also emphasized the environmental commitments and challenges that they have to reach 0 (zero) pollution by 2050; Sergio Lillo, Head of Fisheries Research of the Fisheries Development Institute (IFOP) highlighted the importance of his institution located throughout the national territory, and that it is a leader in fisheries and aquaculture research; and Hernán Tello, Deputy Director of Space Affairs and Colonel of the Chilean Air Force (FACH) who presented on the National Space System (SNA) project, its objectives, its three pillars and who is part of it.

The day ended with the presentations of Intesal, ONEMI, and Global Sea Consulting whose theme was coastal and ocean surveillance.

What is the ConnectEO project

ConnectEO is a European project that aims to promote cooperation between Chile/Australia and European Earth Observation (EO) services and products in the maritime and agricultural sectors. The project is led by the EARSC Consortium – the European Association of Remote Sensing Companies – and co-financed by the European Union under the COSME Cluster Go International programme.