Eurochile held a successful circular economy meeting in which economic, social and environmental advances in Europe were highlighted

Authorities from the European Commission indicated that nearly 4 million jobs are generated, and they estimate that they will have funds to invest in innovation of around 40 billion euros between 2021 and 2031. 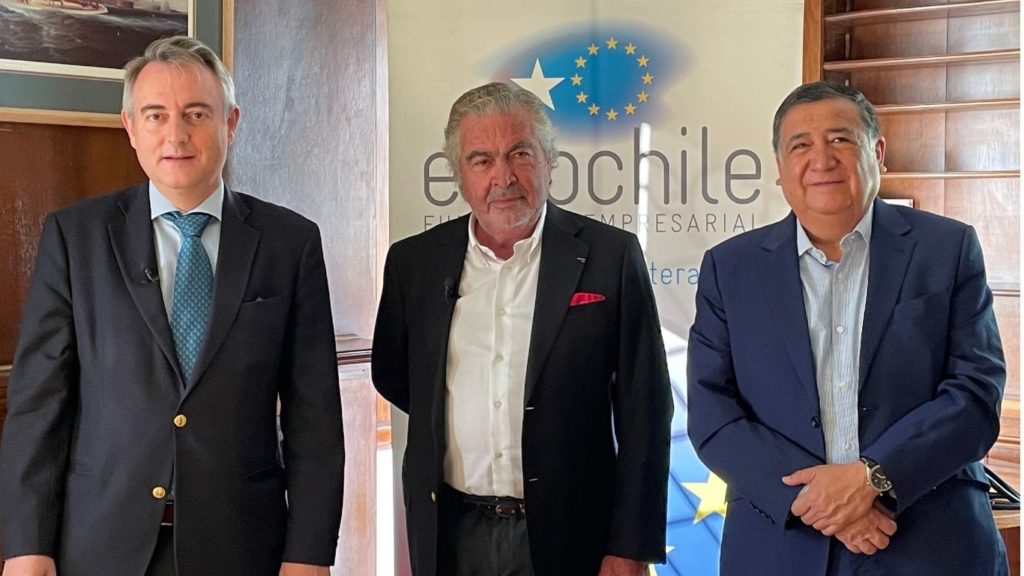 Once again, the Eurochile Business Foundation fulfilled its objective and mission: to connect Chile with Europe and transfer knowledge and good practices. The Circular Economy Conference: Promoting the sustainable growth of Chilean and European SMEs closed  with a call for the creation and deepening of networks and alliances. This activity, organized in December 2021 by the Eurochile Business Foundation was sponsored by the European Commission and is part of a Cycle of Conferences that the foundation organizes on Circular Economy.

The Conference -carried out virtually- consisted of a webinar in the morning and thematic panels in the afternoon with presentations of success stories from the agricultural, tourism and construction sectors. The event brought together authorities  from Chile and the European Commission; and also experts from renowned international organizations such as Circular Change (Slovenia), HIDRIA Ciencia Ambiente y Desarrollo SL (Spain), The Research Institute of Organic Agriculture, FiBL (Belgium), Aclima (Spain) and Fundación Madri+d (Spain)  that provided numbers and examples of successful cases of application of this model, which is already becoming a worldwide trend.

The main objective of this encounter was to promote, contribute, deepen and highlight the role of local networks at a national and international level, to contribute to the conversation on the sustainable development of the territories and productive sectors of Chile, considering that the circular economy has positioned itself as a fundamental tool to address environmental, social and economic challenges.

With more than 200 virtual attendees from countries such as Spain, Portugal, Ecuador, Argentina, Colombia, France, Peru and Bolivia, the president of Eurochile, Vicente Caruz, highlighted that “today we have recently shared quantified concepts and objectives that mean a great advance . We need connections between the public, private, external sectors, regions, financing, and we also need competition. We need the networks in action and the link between all the actors for the advance towards a sustainable economy”.

In the same context, the Ambassador of the Delegation of the European Union in Chile, León de la Torre Krais, stated that in order to “build a climate-neutral and competitive economy, it is necessary to act in all sectors of the economy with actions such as investment in technologies that respect the environment, support industry to invest in innovation, deploy cleaner, cheaper and healthier public and private transport systems, decarbonize the energy sector, make buildings more energy efficient and promote the circular economy” .

Throughout the different presentations of the conference, the scope of the application of the European Green Deal was addressed, as well as the different climate commitments that countries have adopted, where the circular economy has gained special relevance, because, as Javier Arribas -Quintana, senior expert at the European Commission’s Directorate General for the Environment explained, “not only makes sense from an environmental perspective, but also from an economic and social point of view. To illustrate this, between 2012 and 2018, the number of direct jobs linked to the circular economy in the European Union grew by 5%, reaching 4 million”.

This impulse is also explained by the measures and actions that governments have adopted in Europe, such as, for example, the carbon credit system, which as Nicola Ardito from the International Relations Unit of the General Climate Directorate of the European Commission described, “has established the creation of two funds, the one for innovation and modernization; the first is to develop innovative technologies and the other is destined for the member states with the lowest income. The resources of these funds depend on the prices of the proceeds from emissions, and a conservative estimate is 40 billion euros for the two funds between 2021 and 2031”.

Finally, the speakers agreed on that collaboration between all the actors is the key to the transition towards a sustainable model. “The support of governments that must support this circular transformation is needed. They are responsible for giving us the initiatives, adequate regulation and metrics to support this transformation; and on the other hand, there is the governance of the network. The importance of connecting so that those transition agents who work on the ground can work with the governments. Only with the collaboration between all the actors can we run this marathon and apply this circular change” concluded Ladeja Godina, President of the European Circular Economy Stakeholder Platform (ECESP).

In the afternoon, three thematic workshops were held – led by professionals from Eurochile – with the participation of leading international experts and national representatives from the private and public sectors. Its objective was to approach practical aspects of the circular economy in different topics: advances towards a green and circular Public Infrastructure, promoting the incorporation of Circular Economy strategies in public infrastructure projects; development of a sustainable and circular agriculture for Chile, analyzing the benefits, challenges and what are the best strategies to promote this transition; and strategies for circular tourism, support for the tourism sector in its transition towards a circular model and the incorporation of CE action plans in destinations.

For more information on the Circular Economy Conference: economiacircular@eurochile.cl